Posted by lesink on September 20, 2013
Posted in: Uncategorized. 29 Comments

Questioning High Res — Is it Worth It?

I’ve been fiddling around with the A&A code and making a High Resolution graphics version of the game.  The way I’m doing this code is wrong for the long term, but I’m just evaluating how tough this change is and will something like OpenGL be required or can just software rendering be used?  But as I played with this, a question has emerged: Is high resolution graphics even worth it?

Click on the above image and you’ll see what A&A would look in a 1024×800 (or so) view.  The banner and extra UI have been removed temporarily so I can focus on the 3D renderer.  The textures are much better defined, a character in the distance is not a stack of gray pixels, and even a tree on the side doesn’t look too bad.

This picture tells us more.  We have sharp edged walls, okay, nice.  Nice detail in the distant back, cool.  But we have dotty trees and a blocky enemy right smack up close to our face.

I showed these pictures to James and he felt that going to a higher resolution may be a blow to the game’s Retro look.  Will players have a better response to the game if everything stays in its lower blocky mode?

Is there anything (easy) we can do to improve the look of the game by going to a higher resolution?  There is always porting it to OpenGL ….

What do we gain by going to OpenGL?  Here are two views of Doom (taken from http://gldoom.sourceforge.net/), one rendered with WinDoom (left, a software renderer) and one rendered with glDoom (right, an OpenGL version):

Although these pictures are not setup perfectly the same, I find them an interesting lesson … and strangely it leads to a question about what makes a good Retro looking game.

The left has sharp looking textures while the right one blurs all edges.  In the glDoom using OpenGL, anything up close looks a bit smudged/blurred.  So, which looks better to you?  Really, let me know.  Do you want Retro or something else?  Sharp edges or blurred?

And as for objects, they might get better or they might not.  Take for example this image (another glDoom image): 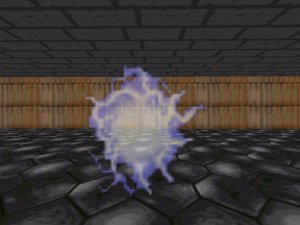 It is not hard to imagine the tree in the above to appear something like this with blurred edges as the graphics tries to smooth out the pixels.  Good?  Bad?  Let me know.

The dirty truth to all of this is that 1) we don’t have great images to work with, 2) scaling them up big just makes them look less realistic, 3) attempting to smooth them makes them look different than their original design.  Here’s yet another example showing some creatures with the scaled smooth.  We see it works nicely on the muscles, but we lose something at the same time: 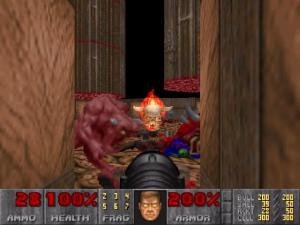 So, many of you may wonder why I don’t just jump on with Unity and use that engine.  Admittedly, that sounds like a really great idea on the surface and I’ve looked.  But here is the simple truth — “Unity is for Amulets & Armor 2”.  What do I mean “2”?  I mean, when we want to create a new version of the game and want to introduce a bunch of new game play concepts, that’s when one should do it.  Unity provides so many new things, it would no longer be A&A.  It would be something else.  It is like calling the upcoming game Wrack just a Doom clone.

Instead, I want A&A to be more accessible for the common person.  A game system where you can draw artwork for it and not be ashamed that your pixel artwork stands out.  I want people to be able to mod it with new code and new rules that add to the fun of the game play without having to figure out how to bring in a new 3D model, texture it, make the bones work, etc.  It has to be simple and extensible.

Back to the original question: Is high resolution graphics worth it?  Is the game any more immersive or does it just cause more problems than it solves?  Is my time better spent elsewhere?

For now, I’m still willing to pursue higher resolutions, but keep a low res version as an option.  I currently do not have plans to redo the user interface, so it makes sense to me to just scale them up to higher resolutions.

Music Lover?  Try this song on for size:  City of the Fallen – Ashes  <– Someone I would love to add music to A&A.