Return of the Avengers and A Little Music Please

Posted by lesink on February 27, 2013
Posted in: Uncategorized. 1 Comment

Return of the Avenger 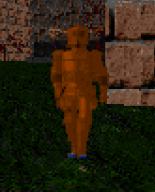 I did a little bit of testing across the different levels and went back to Quest 4: Exiguus and the Undead (sounds like a band name, doesn’t it?).  Running around the level, all was going good until I died.  Well, I died but I could see no attacker.  Holy Toledo, Batman!  I introduced a bug that allowed monsters to attack through walls, right?  Or maybe some weird problem with the creatures in the floors attacking me, right?  No.  I just had forgotten to add back in one of the many routines to draw colorized creatures onto the view.  In effect, our old orange knight (known as the Avenger, who has been nicely colorized from the standard gray knight into that wonderful Halloween orange) was just not being drawn.  And, since I was using a 1st level character, he trounced me in 3 or 4 hits without me seeing whodunit.  Not to worry, about 3 lines of C code later and the Avengers are back in action.

As I stated in my last post, I’ve been working on the background music.  What a surprise this turned into as I had to work the music code differently than the original DOS game.  In the old HMI Sound System, I used routines to stream the music in block by block letting the HMI system tell me when to pull in more.  This was done for memory reasons as we were targetting 4 Meg/8 Meg computers and the sound tracks were about 6 Megs on average.  Flash forward years and I have decided to just load the whole track  instead of the piecemeal system.  Load times are not even an issue.  Unfortunately, I found myself introducing a few dozen bugs.  When the sound is turned off, crash.  When the sound is set to the lowest volume, crash.  When you enter a new level, crash.  When you exit a level, crash.  Yeah, embarrassing how this bug was owning me considering I had just wrote a sound mixer in an evening and yet this bug is messing with me over and over.

Now music is working just like the full system.  You have full control on how loud or soft the music is in the options dialog.  And while I was at it, I fixed some other issues with changing the sound effects level (they would pop when you changed their volume).  I think we are done there.

Next up WASD Controls!  In the old DOS game system, you would go into SETUP.EXE to configure all your custom key strokes.  I’m going to look into putting this configuration directly in the game.  I wonder if I can make that work for both DOS and Windows.  Hmmm … seems simple enough, right?  Might give me a good reason to put a menu in there instead of the “Press ESC again to exit the level…”  I’m also going to look into creating a Look key that switches between the mouse being active with look/pick item actions or making the mouse control the facing of the player.  Yes, this means there needs to be a turn speed and fun stuff of that nature.

This will probably be a big change.  But it should bring that feel that players have with current controls into the game.  Oh, and if someone doesn’t like the new keyboard layout, it’ll be easy to switch back.

Hold on, am I going to have to do some artwork in Deluxe Paint again?